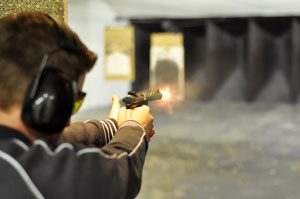 In the United States, gun ownership is still a hot button issue. A 2014 study in the Annals of Internal Medicine reported that having a firearm in the home puts those in the household at higher risk of committing suicide or being the victim of a homicide. And approximately one third of American households keep at least one firearm in the home.

Regardless of political stance, most Americans would agree that guns should be used safely and responsibly, especially in homes with children. If you own a handgun, here are some important refreshers:

Handle with care: Always keep your gun’s muzzle pointed down and away from people and objects. Never leave a gun unattended, and never allow young children to touch or handle guns.

Store guns properly: Guns should be unloaded, locked and stored separately from ammunition in a gun safe, cabinet, or other secure location. Ammunition should also be securely stored. Wherever you choose, make sure the container is locked and truly inaccessible to children; hiding your gun is not enough. To find out how to get a free gun safety kit, go to www.projectchildsafe.org.

Educate your family: It’s a given that every handgun owner should be properly trained on how to safely handle a gun. But it’s critical that everyone else in your home has gun safety training too. According to the Center for Injury Research and Policy, most children know where their parents’ guns are kept, and even a three year old is capable of pulling the trigger on a modern firearm.

Teach kids how to respond: Teach your kids how to react if they come into contact with a gun. Kidshealth.org suggests teaching kids to:

Additionally, kids should be taught that it’s not OK to “play” with a real gun.

Remember, understanding gun safety procedures are not enough: Many gun accidents can be attributed to carelessness, not lack of knowledge. Make a commitment to gun safety and do your part to prevent gun accidents in the home.