Consolidated Insurance + Risk Management CEO John Doetzer announced the promotions of Betsy Korpela to Executive Vice President/Chief Financial Officer and Dan Workmeister to President, effective February 1, 2019. As CEO, Doetzer will remain active and in an advisory role. Since 2012, both Betsy and Dan have been Stockholders of Consolidated. 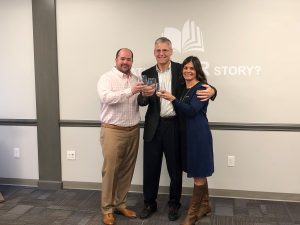 “These promotions simply reflect the current reality of the great work done by Dan and Betsy,” said Doetzer.

A member of the Consolidated team since 1994, Korpela will continue her oversight of the firm’s operational, financial and management components in her role, as well as its representation within the insurance industry.

“Betsy has worn a lot of different hats, and had a lot of different titles, and she’s done so much in the agency, both internally and externally,” Doetzer commented. “Betsy is extremely involved in all the carrier relationships that we have, and her dedication to the industry was recognized in 2018 when she was chosen as the first female President of Intersure in its 50-year history.”

Workmeister joined Consolidated in 2004, and has served as Vice President since 2012. “Dan has done a fantastic job, first as a producer, and then in moving to the Vice President’s position,” said Doetzer. “He has always looked globally at the organization, and as President, he will continue to lead Consolidated’s business development and sales efforts, and will maintain his stewardship of the company’s brand, strategic vision and organizational direction.”

Consolidated Insurance + Risk Management, a full-service independent insurance agency in Owings Mills, began operations in 1969, growing from a legacy dating to the 1930s. When it became clear that the traditional approach to insurance was broken, Consolidated flipped the script. Through tailored assessments, their Story Well Told®  (SWT ®) process, and a passion for promoting their clients’ brands in the insurance marketplace, Consolidated has become an industry leader serving the Greater Mid-Atlantic region.

Please contact John Doetzer from Consolidated at 410-356-9500 with any questions.