Of all the hazards we encounter in our daily driving, the behavior of deer and other wildlife might be the most unpredictable. Wild animals can move quickly and in seemingly random directions, and encounters with moving vehicles happen all too often. 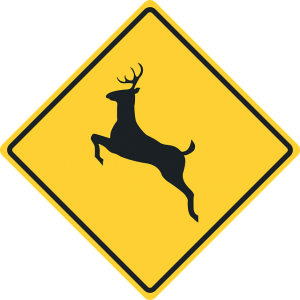 The good news is that collisions between vehicles and deer were down slightly nationwide in 2018, according to a survey by a leading insurer. The bad news is that the cost of those collisions is going up, with the average repair bill now approaching $5,000. This is largely due to increased costs involving all the technological components built into the bumpers, mirrors and windshields of many newer vehicles. So the best idea is to make every effort to avoid those collisions in the first place.

Here are some tips:

It should go without saying, but slow down and use extra caution when traveling in wooded areas, rural areas and near bodies of water, especially in the hours surrounding dawn and dusk, when many animals are most active.

Use high beam headlights when possible. You’ll be able to see further ahead and will have more time to react to animals approaching the road.

When you see the proverbial deer in the headlights – or any other animal – slow down, even if it appears the animal will be out of the way in time. And continue to travel slowly even if it leaves the road completely. An animal may panic and reverse direction suddenly … or you may be seeing only the first of several that are moving together.

Brake, but don’t swerve. When an animal is in your path, do your very best to come to a full stop in time, but don’t yank your vehicle to the left or right. Doing so puts you in greater danger of losing control or colliding with another vehicle or roadside object. (In most cases, if you strike an animal you’ll be filing a claim under the comprehensive section of your auto policy. If you swerve and strike another car or an object, it becomes a collision claim.)

Finally, if the worst happens and you do strike a deer or other animal, stay in your vehicle and call the police. Even if the animal appears still, it may be only wounded, and wounded animals – even gentle deer – can be very dangerous. Stay away.